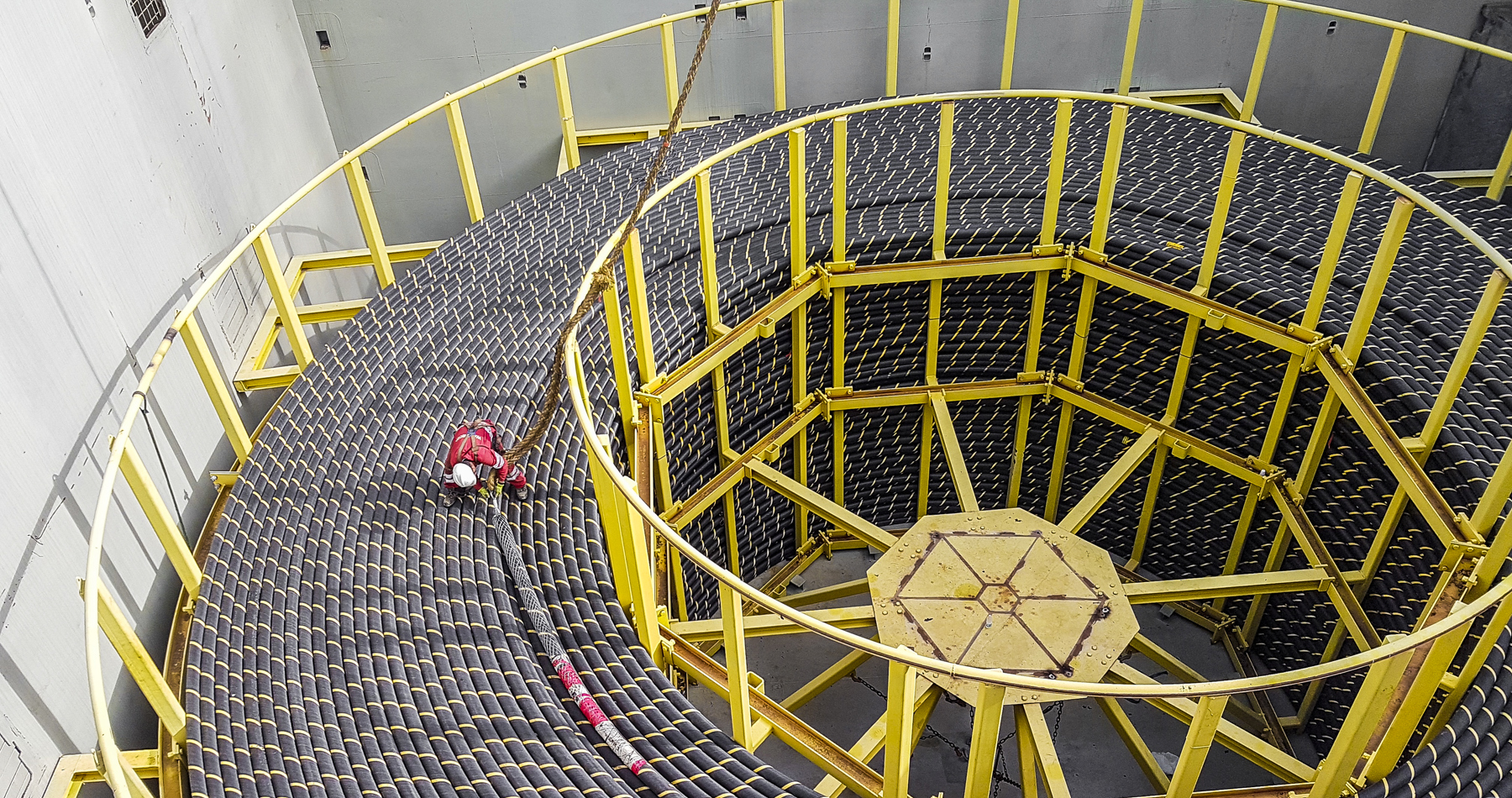 Shipping cables made perfect for BorWin3

These are turbulent times for offshore wind energy in Europe: a prominent topic within the energy strategy of the countries surrounding the North Sea. Several offshore wind farms at various stages of operational deployment have taken hold in the German Bight; fully operational, commissioned, and under or scheduled for construction. But how is the electricity generated at sea delivered to the electrical grid?

The answer is simple: cables, and miles of it. As easy as it sounds, realisation is quite complicated as many of the offshore wind farms are located dozens of miles out at sea. Offshore wind turbines produce an alternating current (AC). To minimise loss of power during transportation back to the mainland this AC is converted to a direct current (DC) at a converter station, recognisable as the yellow ‘power sockets’ at sea. From this converter station thick cables run under the sea floor to a converter station on shore, where DC is again converted back to AC and inserted into the grid.

To facilitate the increase in power generated by the increasing number of offshore wind farms additional converter stations have been scheduled. BorWin Gamma is one of these new converter stations under construction. With a capacity of 900 MW, it is scheduled to be operational by 2019. In 2018 this converter station will be installed about 80 miles offshore by grid operator TenneT. Next step is connecting the converter station to the grid onshore. This is established by means of a 130 km long cable by the name of BorWin3 running subsea west of Borkum.

Production, supplying, installation and commissioning of these cables is provided by Prysmian Group, world leader in power and telecom cables. For constructing the BorWin3 the centres of technological and manufacturing excellence in Pikkala (Finland) and Gron (France) have been used. To install these cables special cable laying vessels are enabled, dispatched from the strategically situated Eemshaven. Wagenborg’s duty is to ship the cables from the different production facilities to the Eemshaven where the cable laying vessels are loaded.

First contact between Wagenborg and Prysmian was established through in 2015. The m.v. Albanyborg was booked to ship the DolWin3 cable from the production facility in Pikkala to Emden. For this shipment cargo superintendent Albert Sneijders developed a special cable tank: “The hold was fitted with pillars and stanchions, positioned as an inner- and outer ring to serve as a cable tank. As much as it was functional, the construction left room for improvement. Installing the cable tank took very long and the construction could only be used once”, Albert explains. In addition, the Albanyborg was also fitted with special equipment on deck in order to be able to use the deck cranes to handle the 34 m long HVDC cable. Wagenborg’s performance satisfied Prysmian to such a degree that a follow up meeting was scheduled immediately in order to continue the business. Albert continues: “We suggested developing a reusable and transportable cable tank. We opted for a Meccano-like structure: it could be placed in the hold quickly, with minimal welding and would be able to make use of the moveable bulkheads and hold partitions already on board”. To full satisfaction, Wagenborg carried out several trips in 2015 for DolWin3 and the Canakkale II Project in Dardanelles Straight - Turkey using this tank construction in the m.v. Amstelborg. “One of these trips required the tanks to be adapted to a bigger coiling radius”, Albert recounts. “In order to increase the inner diameter of the cable tank we created a special adapter consisting of several boltable pillars secured by mooring chains on the inside of the existing construction”. 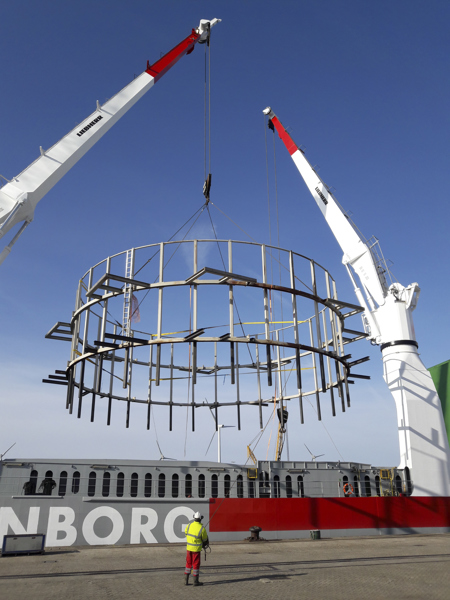 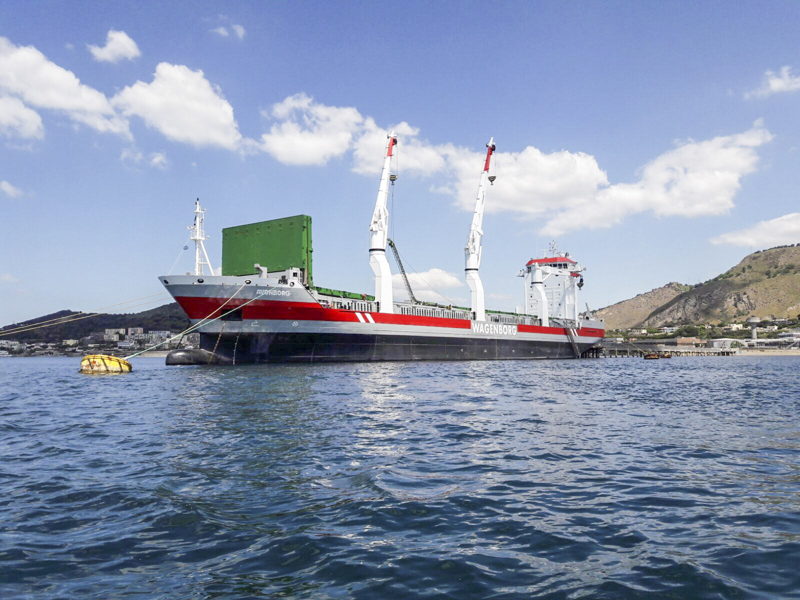 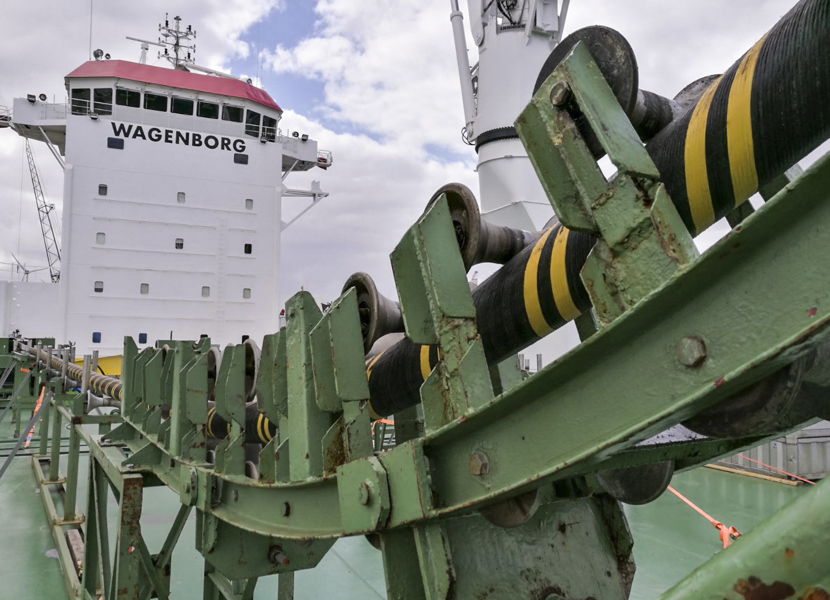 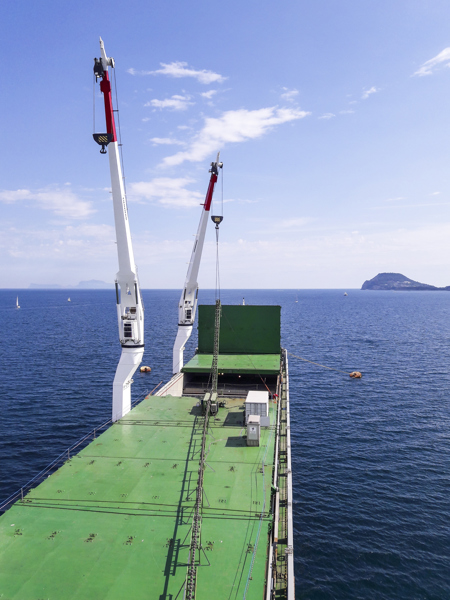 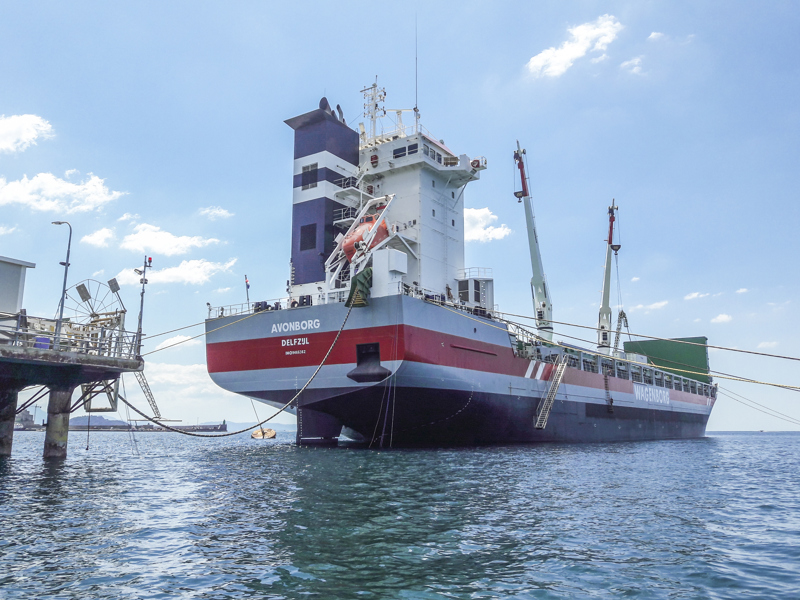 The knowledge and experience acquired on the Amstelborg proves to be an advantage for the BorWin3 cable in 2017. Mid-May the Avonborg moored at the Wagenborg terminal in the Eemshaven to have the special 17,5 m diameter cable tanks installed in the holds. “While installing just one tank on the Amstelborg in 2015 took us five days, adapting, installing AND securing the tanks on the Avonborg was completed in just a short week!” Albert reports proudly. Subsequently, the m.v. Avonborg set sail for Pozzuoli, Italy.
After a swift journey the Avonborg arrived in Pozzuoli as planned. Here began the mobilisation of the vessel in preparation of loading the cables. Specially designed equipment was fitted on deck in order to load the cables into the cable tanks. After completion the m.v. Avonborg was ready to leave for the jetty at the construction site where the cables were waiting to be loaded.

The Avonborg picked up the cable at the end of the jetty where it was loaded up and guided along the special deck equipment into the custom cable tanks in the holds. During loading the stern faced the jetty while the cable was loaded through the back. It was decided to be the safest and most practical method of loading since it allowed for an unobstructed direct path into the hold. Loading the 2 x 65 km of cable with a diameter of 128 mm and weighing 41 kg/m was completed within the time frame, after which the Avonborg returned to the Eemshaven.

Upon arrival of the m.v. Mississippiborg at the Eemshaven the Triton, Wagenborg’s floating crane, was standing by to unload the vessel. Both tanks, weighing 100 and 220 tonnes respectively, were loaded off carefully and placed in a temporary storage facility on the quay at the Wagenborg terminal. With these tanks on site, all cables in the Eemshaven were ready for transhipment onto the cable laying vessels. 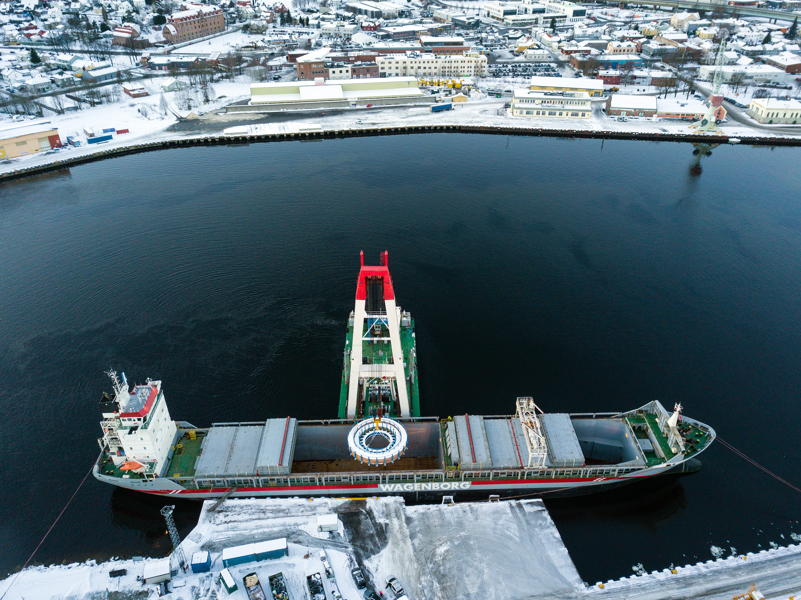 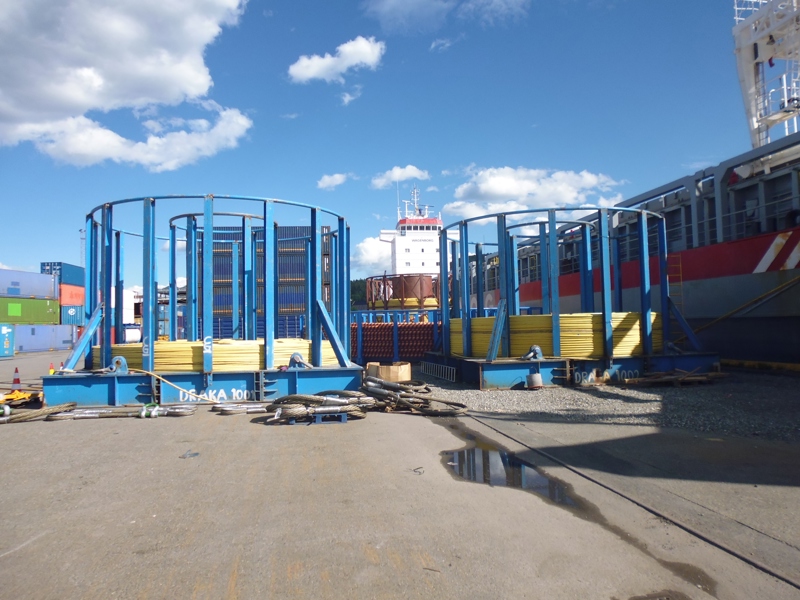 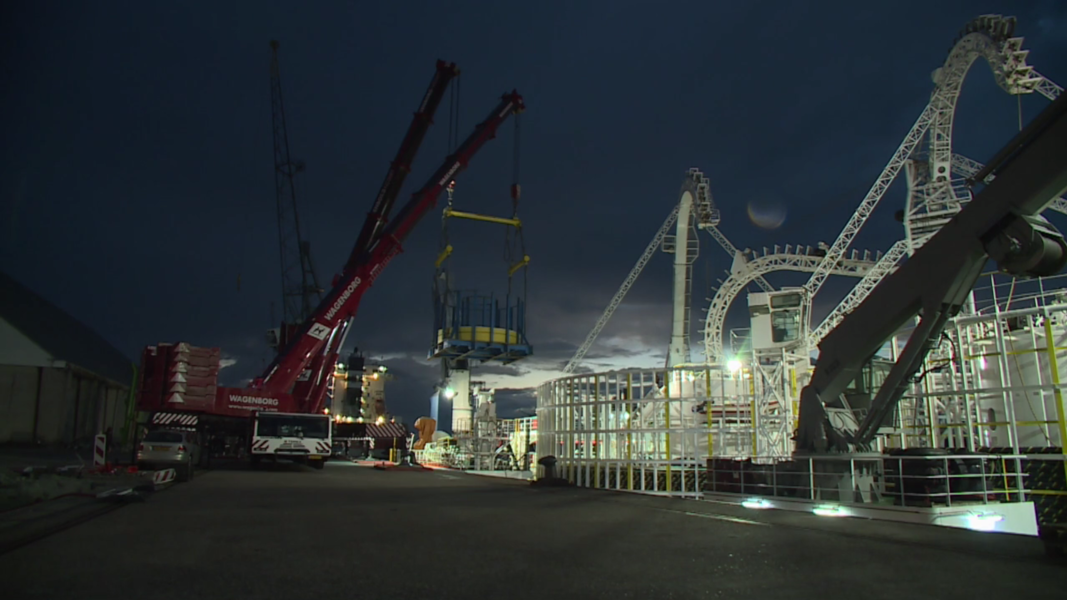 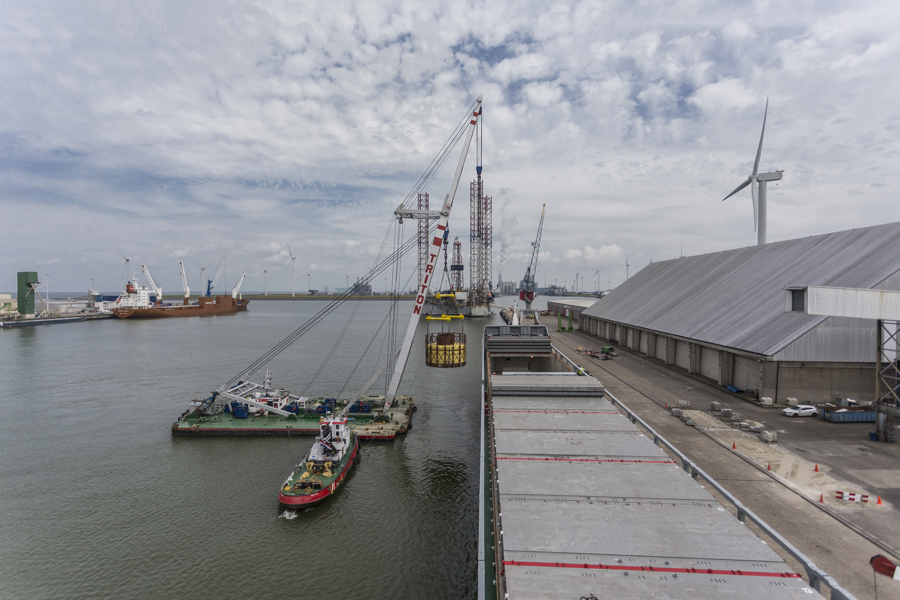 Looking back on the project one can say with certainty that Wagenborg’s strength was used to its fullest: providing a one stop shop for various logistic modalities. Wagenborg Shipping provided the Avonborg and the Mississippiborg, both the Triton and the Waterlines were supplied by Wagenborg Towage, mobile cranes were brought in from Wagenborg Nedlift, Wagenborg Stevedoring arranged the terminal and agency was  taken care of by Wagenborg Agencies.

See all cases
OR GET IN TOUCH WITH US

If you thought the paper industry was going to disappear, think again. Although the worldwide demand for graphic paper declined in 2015 for the first time ever, the paper and forest-products industry as a whole is growing. Especially, packaging is growing all over the world. We talked with Sture Öberg, logistics director for Smurfit Kappa, about the common future of ‘his’ kraftliner trade from Piteå to the continent with Wagenborg.

Shipping dry cargo from the US East Coast to the Far East is nothing special. What is unusual is when inbound and outbound trade turns out to be similar in terms of volume, frequency and vessel needs. And what is even more special when a shipping company succeeds in bringing two businesses together and optimises shipping logistics for both. This is the story of Wagenborg, Alcoa and Rayonier Advanced Materials.

Wagenborg is a company that has literally broken the ice in the harshest and desolate environments in the world. Its early operations mainly involved the timber and salt trade to the Baltic, but today Wagenborg sails the seven seas. Even so, the majority of its fleet movements can be traced back to the Baltic, the St. Lawrence Seaway, the Great Lakes, and Arctic waters. Why is that? Despite global warming, those areas are still characterised by harsh winter conditions, and it’s in those conditions that Wagenborg’s largely ice-reinforced fleet operates extremely well. That may sound pretty simple, but in practice, things are rather different.